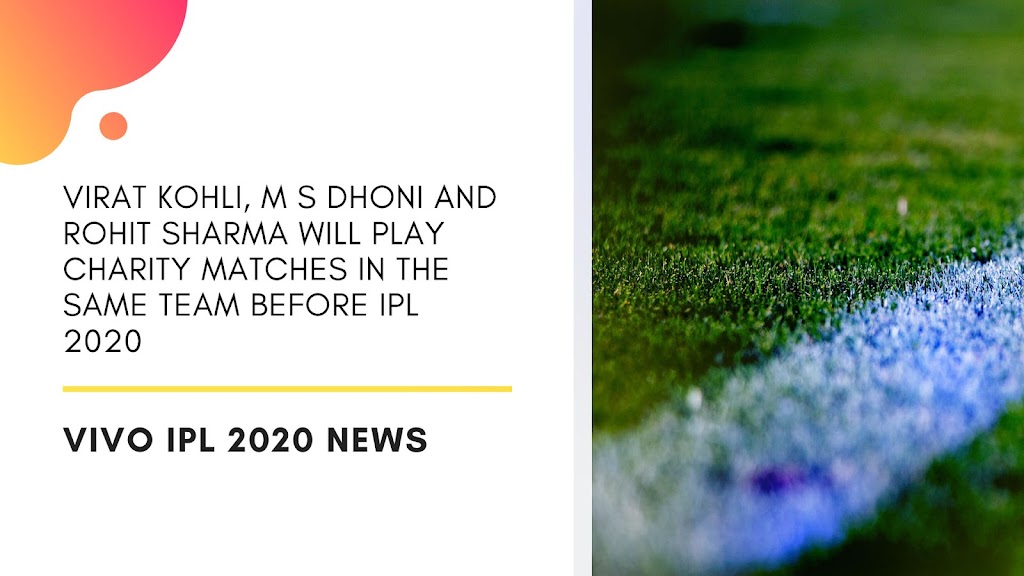 The IPL 2020 Board of Control for Cricket in India (BCCI) and the IPL committee will force Virat Kohli, Rohit Sharma and MS Dhoni to play on the same team.
Vivo IPL 2020: The Board of Control for Cricket in India (BCCI) and the Indian Premier League (IPL) committee will force the current captain of Indian team Virat Kohli and former captain Mahendra Singh Dhoni and Rohit Sharma to play in the same team. This match can be played three days before the IPL, which has been prepared by the BCCI. Let me tell you that the first match of IPL 2020 is to be played on 29 March.
The Governing Council of the Indian Premier League (IPL) in Monday’s meeting in Delhi has also considered that players from 8 teams will be fielded in one match simultaneously. This will be the first time in the history of IPL that a charity match will be held before the tournament and in it, the three best players in India will be kept on the same team. The IPL charity match can be played 3 days before the inaugural match of the IPL, on 26 March, in which all the players will be seen together.
READ MORE ABOUT IPL 2020
–New Rule In VIVO IPL 2020, Will Apply To Injured Player
–3 Foreign Players Who Can Give Royal Challengers Bangalore The Title Of IPL This Year

Reports have said that the BCCI and IPL Governing Council are going to form two teams, one team will be from North and East India, while the other team may be from South and West India. So one team will have players from Delhi Capitals, Kings XI Punjab, Rajasthan Royals, and Kolkata Knight Riders team, while the other team will have players from Chennai Super Kings, Mumbai Indians, Royal Challengers Bangalore, and Sunrisers Hyderabad.
According to an ESPN Cricinfo report, the idea of ​​an All-Star match was coined by Sourav Ganguly, the current chairman of the Board of Control for Cricket in India (BCCI). Ganguly was accompanied by IPL Governing Council Chairman Brijesh Patel at the board meeting held in Delhi. If this plan of BCCI becomes a ground reality then there will be a different view on the cricket field.

AB De Villiers, MS Dhoni, Virat Kohli, and Rohit Sharma will be in the Same Team In IPL 2020 Charity Match

If you look at the South and West Zone teams, then in this All-Star Match, players like Virat Kohli, MS Dhoni, Rohit Sharma, AB de Villiers, Jaspreet Bumrah, Shane Watson, Harbhajan Singh, and Lasith Malinga will be part of a team. At the same time, according to the franchise of North and East, players like Andre Russell, Rishabh Pant, Ben Stokes, Shreyas Iyer, Dinesh Karthik, Pat Cummins, Eoin Morgan, and Jofra Archer will be in the second team of IPL Charity Match.
Hope You got information About “VIRAT KOHLI, M S DHONI AND ROHIT SHARMA WILL PLAY CHARITY MATCHES IN the SAME TEAM BEFORE IPL 2020 !”…
If You Like Our Content Share It with your family and friends…