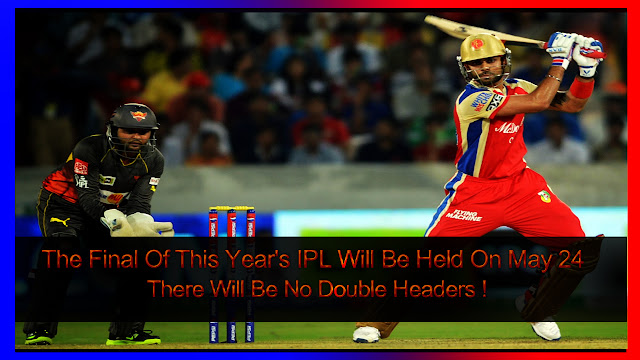 The first match of this year’s Indian Premier League (IPL) 2020 is scheduled to start from March 29 at Mumbai’s Wankhede Stadium and the final match will be played on May 24.
The next edition of the league will last for 57 days, which means that the league’s broadcaster Star Sports has almost made up its mind and during this season the practice of two matches in one day will be abolished. At the same time, the start of the matches is almost certain from 7:30 pm. A source close to the matter has confirmed to IANS that the league will run for 57 days and being a long league means that two matches in a day will now be a thing of the past.

IPL2020 full schedule is not prepared yet, it is sure that the final of the tournament will be held on 24 May and it will begin in Wankhede Stadium, Mumbai on 29 March. This means that you will get more than 45 days. In such a situation, there should be no problem in getting one match done in a day.

Seeing that the broadcasters want to start the match early, the source said that it is also almost certain that the matches will start at seven-thirty in the evening. It is not just about broadcasters but if we look at the last season, most of the matches ended quite late.

He said, ‘Look, TRP is definitely a question. But don’t just look at him. You see how late the matches ended last year. It was also a problem for those who came to the stadium to watch the match. They also faced a lot of problems going home after the match. It was talked about a lot and now it seems that matches this season can start at seven-thirty in the evening.

However, the franchisees believe that by the time the match is being said to start, it is almost impossible for people to finish the work and reach the ground.

A franchisee official said, ‘Suppose you live in a metropolis like Delhi, Mumbai or Bengaluru, then you have to face a huge traffic problem. So do you really think that people can leave the office at 6 o’clock and reach the stadium before the match starts with their family? This should be considered before changing the time to start the match.

Regarding the double-headers, the franchisee says that the broadcasters were not too enthusiastic about the four o’clock match, but the source says that there was a big question of earning here too.

The source said, ‘Do you think that only the broadcaster had trouble? We should talk about practical. The franchise was also having trouble filling the stand in the afternoon matches. So it is good that the afternoon matches are called farewell and focus on only one match in a day.