IPL 2020 News: Another Shock To KKR, Pravin Tambe cannot play in IPL 2020 As Per BCCI Rules 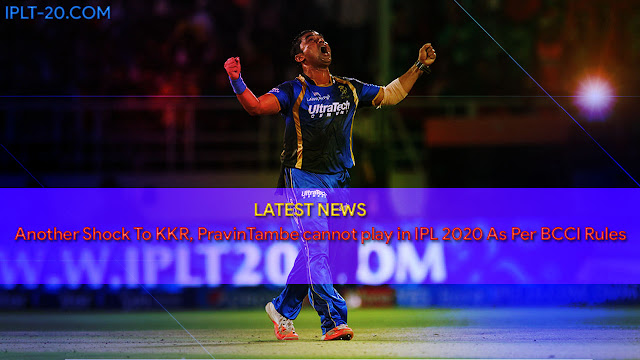 IPL 2020 Latest News – Senior leg-spinner Pravin Tambe will not play in the Indian Premier League (IPL) 2020. A senior BCCI official confirmed to IANS that he would not be able to play in the IPL since Tambe has played in the T-10 league. The upcoming season of the IPL starts on March 29.

What did the BCCI officer say about Parvin Tambe?

Pravin Tambe, born in October 1971, is a leg break spinner. BCCI officer Said “The BCCI rules clearly state that Indian players will only play in the IPL or they should stay away from it and play in leagues of other countries. Sending his name to the T-10 league and now making him part of the IPL would be clearly against the BCCI rules. Therefore, he cannot play”

Pravin Vijay Tambe is an Indian cricketer who currently plays for Sunrisers Hyderabad(IPL League). Pravin Tambe made his IPL debut at the age of 41 and now he is the oldest IPL player in history. Last Year He played for KKR(Kolkata Knight Riders) in IPL.
Born – 8 October 1971
Pravin Tambe Age – 48 Years Old
Bowling – Right Arm Leg break(Spinner)
Pravin Tambe was bought by the two-time winner Kolkata Knight Riders in the IPL auction 2020 last month(December) for Rs 20 lakh. Pravin Tambe has played the IPL earlier as well. He made his IPL debut in 2013 at the age of 41. He played a total of 33 IPL matches in four seasons between 2013 and 2016, taking 28 wickets.
During this time he was in the team of Rajasthan Royals, Gujarat Lions, and Sunrisers Hyderabad. He has not played a season since 2016. He was bought by the Sunrisers Hyderabad team in the year 2017 but did not get a chance in the playing eleven of any match.
After being sold in the IPL auction 2020, Pravin Tambe said, “I still play with this mindset like I am 20 years young.” He said, “I will bring all my experience and energy to the team. I will bring positivity. I know that if I am with the team, I can do that. Indian Premier League (IPL) 2020 will start on 29 March 2020.