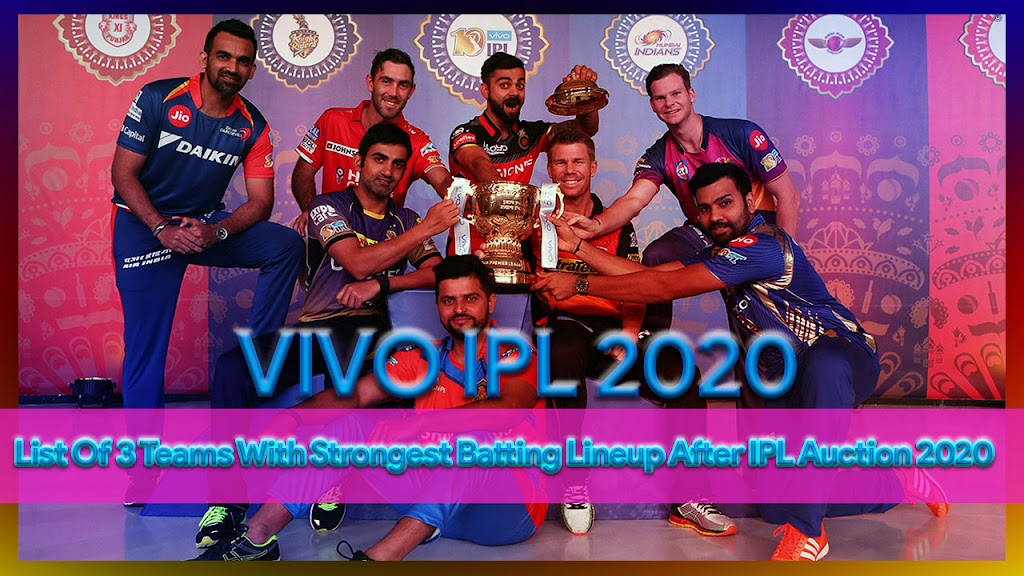 The new season of IPL, season 13 is going to start from 19 September 2020. This year’s IPL is going to be very colorful because this year the IPL has undergone many changes compared to last year. We got to see a lot in the IPL auction this year. In this IPL auction, many new players were sold in good bids. But all the teams in this year’s IPL are certainly very strong and all the teams have good batsmen and good bowlers. This time, every team has good batsmen in IPL. As we know that if a team has the title of IPL, then how important it is for that team to have good batting. But there is no doubt that every team has good batsmen in IPL 2020.
So in this article, we will talk about the batting lineup of 3 very strong teams.

The first team that has the most dangerous batting lineup of DREAM 11 IPL 2020 has become even stronger after the auction process is the Delhi Capitals team. There was a time that Delhi’s batting used to be very weak i.e. they did not have a good batting lineup. But in today’s condition, after the arrival of Ricky Ponting for the last two years, especially after this year’s auction, Delhi Capitals have 8 Proper batsmen and in this year’s IPL, no team has 8 Proper batsmen only Delhi Capitals have.

The following list of the player is given below

1.Shreyas Iyer
2.Shikhar Dhawan
3.Ajinkya Rahane
4.Shimron Hetmyer
5.Jason Roy
6.Alex Carey
7.Prithvi Shaw
8.Rishabh Pant
Out of these 8 batsmen, 3 are foreigners, all three are amazing players, they have the best core of Indian batsmen, they have the best lineup of Indian batsmen. This means that Delhi’s team has the most depth in batting this year. Apart from these 8 batsmen, there will also be a support batsman “Marcus Stoinis” who will play the role of the all-rounder. This team has the most dangerous batting.

The second team that has the most dangerous batting lineup of IPL 2020 after the auction process is the team of Royal Challengers Bangalore. Whether it is RCB‘s team, batting line and RCB’s name does not happen. And this time also his batting lineup is very dangerous because Virat Kohli is AB de Villiers. This team is at the next level as it currently has 5 proper batsmen and one supporting batsman. Talking about their batting lineup, they have these players

The following list of the player is given below

1. Virat Kohli
2. AB de Villiers
3. Aaron Finch
4. Parthiv Patel
5. Moin Ali
The supporting batsman of RCB will have “Chris Morris” as the all-rounder. Definitely, RCB’s batting lineup is very strong and dangerous only due to Virat Kohli and AB de Villiers. It is clear that as seen from the last four years, rcb batting used to be completely Virat and AB de Villiers depending on them this year too. Aaron Finch can do something…

The third team that has the most dangerous batting lineup of IPL 2020 is the Mumbai Indians team after the auction process. After much thinking, we have put Mumbai here. Mumbai could have been at number two as well. Mumbai Indians have 6 proper batsmen and two supporting batsmen. Talking about their batting lineup, they have these players
1. Rohit Sharma
2. Quinton De Kock
3. Chris Lynn
4. Suryakumar Yadav
5. Ishan Kishan
6.Sherfane rutherford
As the supporting batsman of Mumbai Indians, they have Kieron Pollard and Hardik Pandya who will play the role of an all-rounder. Definitely, the depth they have more than RCB means batting of Mumbai Indians will come in a lot of depth and IPL is being successful and their secret is their batting constantly because they have Rohit Sharma and De Kock entering with them. Chris Lynn may not be able to play in the playing XI and in such a situation his batting will be a bit weaker than RCB. If Chris Lynn also plays with him in Playing XI, then there is no break with him. Indian batsmen have the best and the best. They have all-rounders who probably do not have anyone in batting like Kieron Pollard and Hardik Pandya
So these are the three teams who have the strongest batting Lineup In Dream 11 IPL 2020…Hope You all Like Our Content…